Many places are recognisable for their vistas and Albury is no different. Images of Albury’s streets, grand buildings, gardens and monuments have long been used to promote and celebrate the city.

The objects in this exhibition, drawn from the AlburyCity Collection and private lenders, provide an insight into Albury throughout the twentieth century. These early photographic views of Albury record a developing city and reflect the image it wanted to share with the rest of Australia and beyond.

These views capture a community proud of their civic buildings and streetscapes, engineering achievements, monuments, amenities and setting on the Murray River. This imagery, repeated throughout the years on postcards and souvenirs, suggest a reinforcement of these values both within Albury and to its visitors.

Have these Albury Views stood the test of time?

“The above is the title of a splendid leaflet of views of all the principal buildings, streets, scenery, etc., surrounding and in Albury. The production is really well got up, the blocks being first class, and the photos call for special mention on behalf of the photographer, Mr. Pusterla” (The Border Morning Mail and Riverina Times, 17 December 1903).

John Brown Thompson, born in Launceston in 1873, arrived in Albury in the 1890s. He joined the firm Messrs TF Hughes & Co. before opening his own business in 1904. The Olive Street store was a newsagency and mixed business selling books, stationery, leather goods, music and instruments. In 1908 J. B. Thompson’s is reported to have been carrying 17,000 picture postcards including his self-published series of local views.

Peter Wesley Blake, born in Ontario, Canada in 1860, immigrated to Australia in 1881. He moved to Albury in 1896 after purchasing the newsagency and stationery business of Messrs TF Hughes & Co. Described as ‘enterprising’, his store named Blake’s Busy Book Bazaar, stocked “everything required in books, newspapers, stationery, leather and fancy goods, music, musical instruments etc” (Border Morning Mail and Riverina Times, 16 May 1906). Like J. B. Thompson, Blake published a series of local pictorial postcards in the early 1900s. Blake sold the store in 1912 to Arthur Hewish who retained the name of the store.

Postcards were introduced into Australia in October 1875, six years after originating in Austria. These early postcards had no pictures and were produced mostly by the Post Office, with strict regulations on size and placement of address. It was in 1905, with the growing popularity of pictorial postcards, that the format we are familiar with today was allowed by the Australian Post Office.

Between 1900 and 1920, picture postcards were incredibly popular in Australia. In 1905, T H Mate & Co Ltd carried a selection of 13,000 different postcards, at a time when Albury’s population is estimated to have been 6,414. The Albury Banner and Wodonga Express reported that in November 1906, no less than 7,254 postcards had been posted at the Albury Post Office and that 5,655 had been received.

They were popular not only as a cheap and informal way to send messages, but as inexpensive souvenirs. It was noted that despite the small price, “in this particular instance the some-time accompaniment of cheapness – nastiness – is not apparent...not infrequently it is a gem of which the artist may well be proud” (Albury Banner and Wodonga Express, 15 February 1907).

In addition to those produced by large firms such as Rose Stereograph Co. and Valentines Publishing Co. Pty Ltd, postcards were also published by local businesses including P W Blake and J B Thompson up until c. 1910.

George Rose (1861-1942) was described in his obituary as “one of the pioneers of photographic art in Australia” (The Age, 21 January 1942). A hobby in photography led to experimentation with three-dimensional stereoscopic work and the establishment of the Rose Stereograph Co. in 1880.

After the popularity of stereographs declined, in 1913 he turned to the production of postcards. The company, which was sold to Herbert Cutts in 1940, continued to produce postcards until 1967 when the company switched to machine manufactured postcards printed by an external company.

Valentine Publishing Co. was originally a branch of the Scottish lithographic company Valentine & Sons established in 1851. In 1923, when the company closed most of its overseas branches, the Australian branch was acquired by Percy George Watkins and John Faull Palamountain and set up as a new company. The close relationship between the companies continued however, with many of the cards published by the company being printed in Great Britain up until 1955. The company ceased operations in 1963.

The birth of leisure tourism occurred in Europe in the mid 1800s from the custom of the Grand Tour. As more travellers sought out items to bring home from their journey, spoons etched with names of cities and famous landmarks gained popularity. Seeking to expand its selection of products for the new market of middle and lower-class travellers, the souvenir industry branched into tableware.

This collection of souvenirs features examples of the extensive range of fine bone china tableware patterns produced by manufacturers in Czechoslovakia and England, c.1930s - 1940s. The manufacturers were provided with photographic transfers which were applied to the china and tinted by hand before a final glazing.

The glassware pieces, c.1950s, were made more economically by adhering photographs, often colourised, to the base of clear glass pieces.

More contemporary souvenirs from the region show a move to smaller objects of more durable materials such as handkerchiefs, key fobs and cloth badges.  Some items are intended not for visitors, but for residents such as the This Is Your City board game. What can be seen from these objects is that whilst the form and function may have differed, it is the same views of Albury being celebrated.

These ‘High School Albury, NSW’ objects, in addition to the manufacturer’s mark, are stamped with ‘C.C Potts, Albury’. Potts ran a mixed business in Albury in the 1920s-1930s.

When you think of Albury, are these the pictures that come to mind?

In the early twentieth century, carefully selected vistas were used to shape an image of Albury. In the twenty-first century, photography has been democratised by the advent of camera phones and social media. With a simple hashtag, anyone can contribute a view of Albury.

Many of the sites celebrated by the original Albury Views series still stand today, however social media demonstrates a move away from images of our built heritage.  The focus now leans towards Albury’s magnificent natural settings and perhaps unsurprisingly for social media, food.

We would like to acknowledge the generous assistance of Howard Jones OAM, Ron Boadle and Richard Lee. 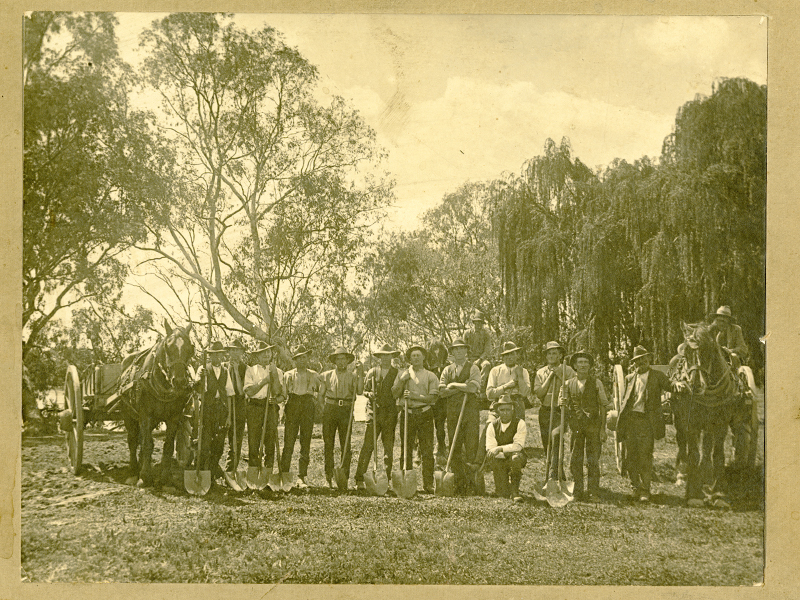 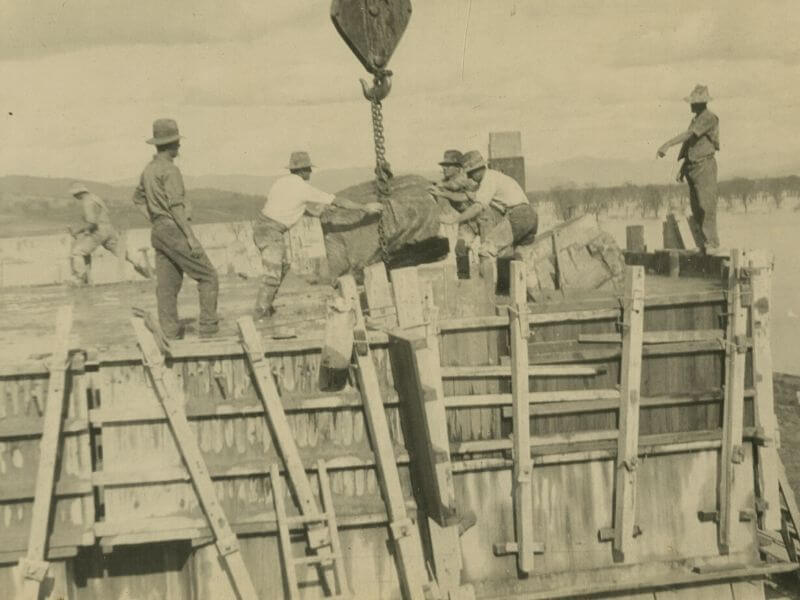 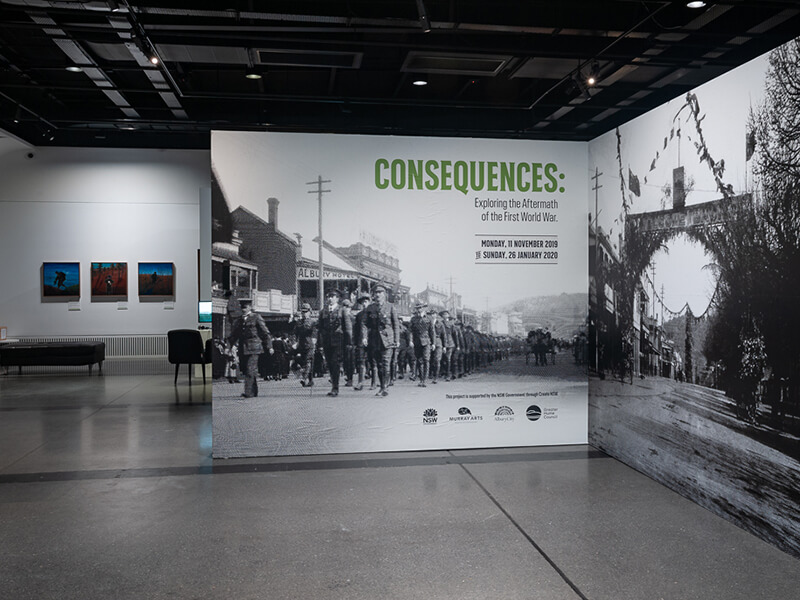