Using a collection of spectacular couture gowns donated to the collection by Vie Hawkins, this interactive exhibition examines regional Australia and high fashion from the 1960s.

The Vie Hawkins Collection is an assortment of fashionable pieces that were bought throughout the world and worn in the region. They help represent the fashion of the time, show the early stages of a new Australian industry, present a picture of a hardworking yet fashionable regional life, and help explain how the Australian fashion world that we know today developed.

Viola McLarty was destined for a fashionable life within a prominent family in the cattle industry. Known as ‘Vie’ to her family and friends, she was the eldest of Douglas and Stephanie McLarty’s three daughters. The family lived at and owned a station near Jerilderie, New South Wales, called ‘Silver Pines’. Stephanie McLarty (née Osborne) was the daughter of one of the state’s oldest known pastoral families. Douglas McLarty, an innovative man, owned the oldest Poll Shorthorn cattle stud in Australia. He also bred high-quality Merino sheep on the family’s property.

It was not an isolated life for Vie or her family, who were busily involved in managing ‘Silver Pines’, attending local society events and taking frequent trips. Australia was a faraway place in the mid-20th century, but the McLarty family was able to travel to Europe. As a young single woman, Viola travelled overseas with her sister Isobel. Among her souvenirs from London was the Hardy Amies suit.

On her regular trips to Sydney, Vie would attend parties and business functions, and see friends and family, but it was also a great opportunity to shop for the latest fashions. Shopping wasn’t a matter of grabbing a gown off the rack; rather, it was by appointment at one’s favourite boutique.

Beril Jents, known as Australia’s first queen of haute couture, and Germaine Rocher, one of Sydney’s most celebrated fashion houses, were the go-to designers for the Sydney elite. They attended to many society-type clients, among them Viola of Jerilderie. Vie would be fitted for the couture pieces, which might be an original gown or a suit to be treasured.

The detail and skill within the designs were grand, but the quantity was small. Wardrobes were not filled and changed every season; there was a point to, a purpose for, each piece of clothing.

All the items on display were worn by Vie in the Albury area. Some were worn on day trips into town, but the gowns were worn at significant community events such as society balls. When Viola married Charles Hawkins of Finley, she settled into the life of a property owner’s wife and business partner. Familiar with the business already, Vie relished the dinners and social events that helped maintain important business relationships. Now, her gowns were designed to wear at these occasions, such as the black dress by Leonard of Paris.

The customs of mid-1960s womanhood were different from the carefree life of late-1950s girlhood. While the changes in fashion in the 1960s meant that Vie wouldn’t be constrained by the strict protocols of the 1950s, as a wife, mother and business partner, she wasn’t a part of the ‘youth revolution’ which popularised fashions such as mini-skirts and go-go boots.

She was, however, a part of a growing number of women who claimed style as their own, encouraged a new Australian industry, and travelled widely to bring it all back home: from Paris to Albury. 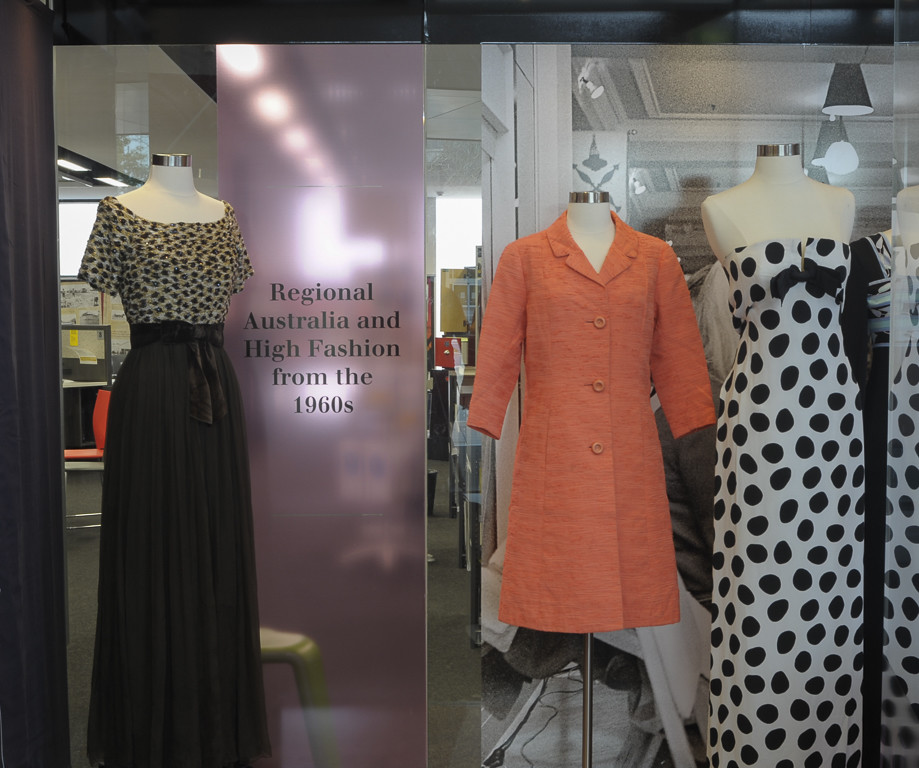 From Paris to Albury:  Regional Australia and High Fashion in the 1960s