Pteropus poliocephalus
The Grey-headed Flying-fox is the largest bat found in Australia with a wingspan of up to 1 meter. Albury is home to a regionally significant Flying-fox camp which is located on the banks of the Murray River. 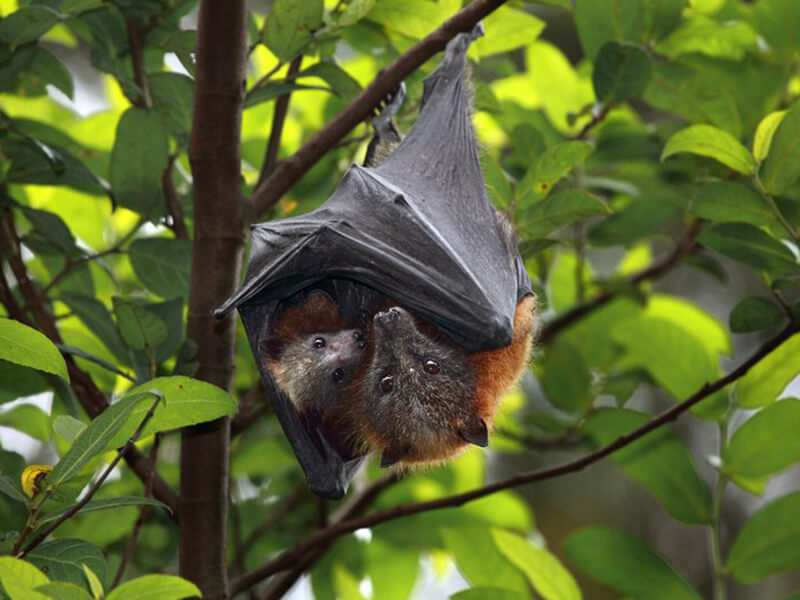 That’s quite a voice!

The main form of communication for Flying-foxes is sound, and because their hearing range is similar to our own, thus the sounds they make we can hear quite easily.

Over 30 different sounds have been recorded, these calls are used to identify each other and defend their territory.

Flying-foxes are noisiest during dawn and dusk, as the individuals of the colony prepare to move in and out of the area.

Calls during the day are usually occur during the mating season – in autumn. Daytime calls are often in response to disturbances include:

The pollinators of the Australian night

Flying-foxes are incredibly important for the reproduction, regeneration and dispersal of native plants in our country.

Basically, as the flying-fox seeks nectar in flowering native plants they also pollinate the flower – which in turn helps the production of seeds.

A Flying-fox can fly up to almost 90 kilometres during the night!

During the long journey, the Flying-fox can spread seed and pollen over a large area - with up to 60,000 seeds being dispersed during the night. The entire process helps in assisting the regeneration of our native bushland, and can also help in establishing some new bushland areas.

This theory is supported by a variety of evidence, including:

The Grey-headed Flying-fox colony have occupied camps within the area for quite a few decades, this colony used to occupy some Willow trees below the Hume Weir wall about 30-40 years ago. The colony eventually established itself in the Albury Botanic Gardens in September of 2013.

Quite a bit of concern was raised about the potential damage to the Botanic Gardens, public health, safety risks, as well as, potential impacts on the colony itself. To solve the problem, a number of different experts were engaged. The experts assisted by providing advice on the options for managing the Flying-fox colony, in the end relocation of the colony was regarded as the best choice – the colony was dispersed in May 2014.

The colony settled itself near Bungambrawartha Creek in Padman Park, however the campsite was deemed inappropriate as the location of the colony was in close proximity to residential, recreational and culturally significant area.

Another relocation was proposed and undertaken, the colony was dispersed and relocated to Leaney’s Bend. Where they reside now!

Occasionally juvenile or injured flying-foxes may be found on the ground or caught in netting or fencing. For your own safety, do not attempt to handle these animals. Only trained individuals who are protected by a vaccination should handle and care for the flying-foxes.

We have developed a camp management plan to record how the Padman Park (Leaney’s Bend) flying-fox camp will be managed.

The objectives of the plan are to:

The Wiradjuri word for the Flying-fox is Budharu