Thursday 17 June 2021
Transport for NSW has announced the Hume Freeway through Albury will get a makeover, to make the gateway to the city more visually appealing to the 25,000 motorists who pass through every day. 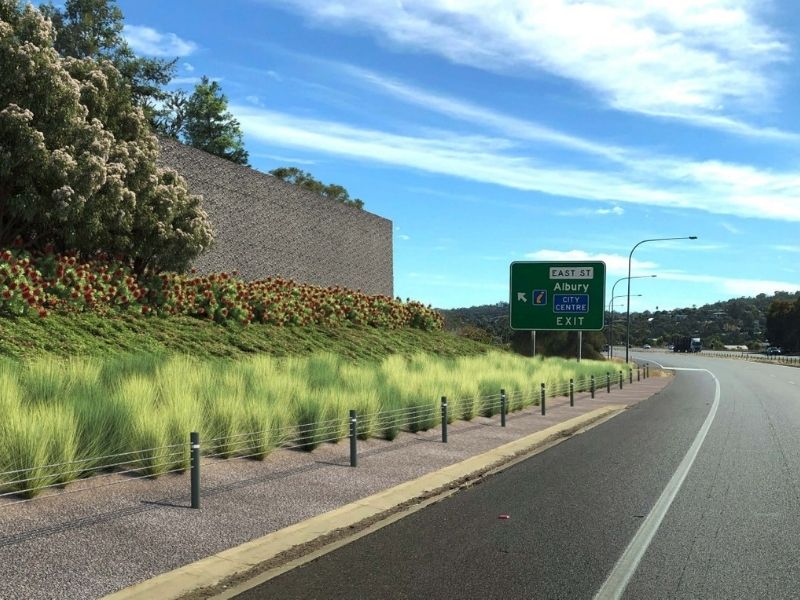 The beautification works will include extensive plantings of vegetation native to the area, with a ‘minimalist’ approach to emphasise the land formation and provide open views.

Jointly funded by the Commonwealth and NSW Governments, the project will not only deliver a more attractive road corridor, but will also enhance the environment and reduce the risk of bushfires.

AlburyCity has worked closely with both governments to design the landscaping and select the appropriate vegetation, which includes red gums, and a range of native grasses, shrubs and groundcover plants.

Planting will start in August to be undertaken over two planting season, with the new-look highway surrounds to become evident in about 12 months.

The landscaping work will take place in four locations:

To reduce the impact on motorists, work will take place on weekdays, from 9.30am to 3.30pm, weather permitting, and is expected to be completed in August 2022. Single lane closures and reduced speed limits will be in place during work hours.

AlburyCity Mayor Kevin Mack has thanked the Commonwealth and NSW Governments for their support, saying the works will create a fantastic first impression of Albury for thousands of highway travellers.

‘The existing freeway verges are greatly in need of a facelift and these works will transform the approaches to the city, creating an appealing, environmentally-friendly introduction to Albury for visitors and locals,” he said.

“We’re looking forward to continuing our collaboration with Transport for NSW to deliver this exciting project.”

This project is a part of the Federal Stimulus Road Safety program and is jointly funded by the Australian Government and NSW Government.

In total, the Australian Government has committed up to $300 million and the NSW Government a further $108.2 million to fund the state-wide upgrades under tranche one.