Celebration of nature as walls come to life

Thursday 10 June 2021
AlburyCity has been working with the community, building owners and business owners to add interest and vitality to our urban areas through art. 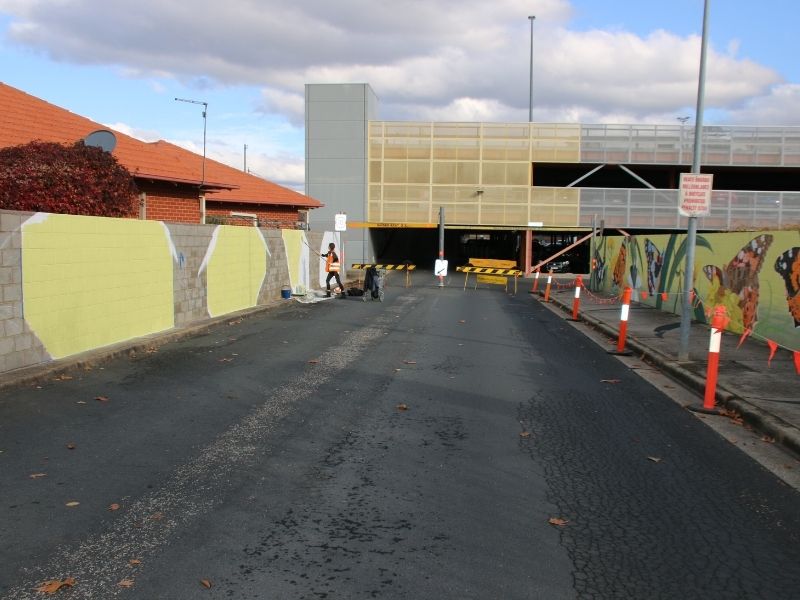 Over the past 12 months a number of murals have been created around Albury CBD, Thurgoona and Lavington, using themes that depict our area, native wildlife, landscapes, activities culture and history - all created by local artists.

Kristina Greenwood is a South Albury-based artist. She is currently working on her second wall down the driveway entrance to the Wilson Street Car Park. Her mural for both the western and eastern walls of the entrance depicts local butterflies and flowers. She has researched each one and they can all be found in our gardens and in surrounding bushland. Kristina started the project as part of the Upstream Festival 2021 in January and will finish by the end of June.

Kade Sarte is Lavington born and bred and has just finished his second mural in Albury, for the year, in Blacklocks Lane at the back of the Kmart building. This mural is large in proportion and depicts the Mighty Murray Float, synonymous with the area over the summer months.

Kade’s first mural is on Wagga Rd, just past the Fiveways. He too was part of the Upstream Festival 2021. This mural is of local birds; it is bright and playful and elevates an old electrical substation to new levels.

Tracie MacVean has been working on a series of murals on the walls of the Thurgoona Community Hall on Table Tap Rd both for Upstream 2021 and beyond. All her murals are of local birds and animals - wedge tailed eagle, echidna, squirrel glider to name a few. She is transforming this space into a gallery of artworks that greet all who use the hall and surrounding green space.  It is also a fantastic educational tool for those who may not know what animals and birds they live with every day.

Kirily Anderson created a mural on the wall of the Townsend Vet Clinic in South Albury for the Upstream Festival 2021. She depicts and highlights the plight of the endangered pygmy possum, which can be found in the Alpine regions around Albury. These tiny animals rely on the Bogong moth as a food source which is in decline, causing grave fear for the pygmy possum’s survival. Kirily is a Chiltern-based artist who has worked extensively in Melbourne and across Victoria.

On the wall of the City Walk building on the Volt Lane side, Chris Henderson has painted a scene from Wonga Wetlands. Bird watching and photography is a major attraction at Wonga and this is what Chris has chosen to depict in his mural. A bird enthusiast is watching a little egret, an endangered water bird found at Wonga. Chris grew up in Wangaratta and is now based in Beechworth. His style of mural is bright and bold and includes a touch of playfulness. He too wanted to highlight the plight of our local bird life in our local area.

Tamara Murray is a local Indigenous artist. She created a mural on the Wagirra Trail along the banks of the Murray River as part of the Upstream festival. Her mural is line drawing and draws on her cultural heritage and reflects the feelings she has for her connection with the land and people that call this area home.

Burg was a traveling artist who called Albury home for a year in 2020. During his time in Albury he painted a mural on the back of the T&G building on Volt Lane in the CBD. This mural is of four men sitting on a bench watching the world go by. Burg saw this as a universal depiction of the people he came across while living here, a relaxed and urban culture with deep connections to its rural roots, a community warm, inviting and easy going.

Burg also painted the ping-pong table that sits permanently outside Retro Lane Café in QEII Square. Several local community youth groups came up with the theme of a local bird and Burg chose the kingfisher, which is bright, intelligent and stunning to look at.

AlburyCity will continue its mural and street art strategy into the future with a commitment to continue to engage local artists to paint and decorate some of our more neglected and in-need areas, adding colour and interest to our cityscapes. This strategy includes themes that reflect Albury, its people, its landscape, its wildlife, in this way we hope to highlight aspects of our great community and tell the stories of our town.