Friday 5 February 2021
The development of the NEXUS Industrial Precinct north of Albury has taken another major step forward, with construction now under way on a world-class recycling facility at the site. 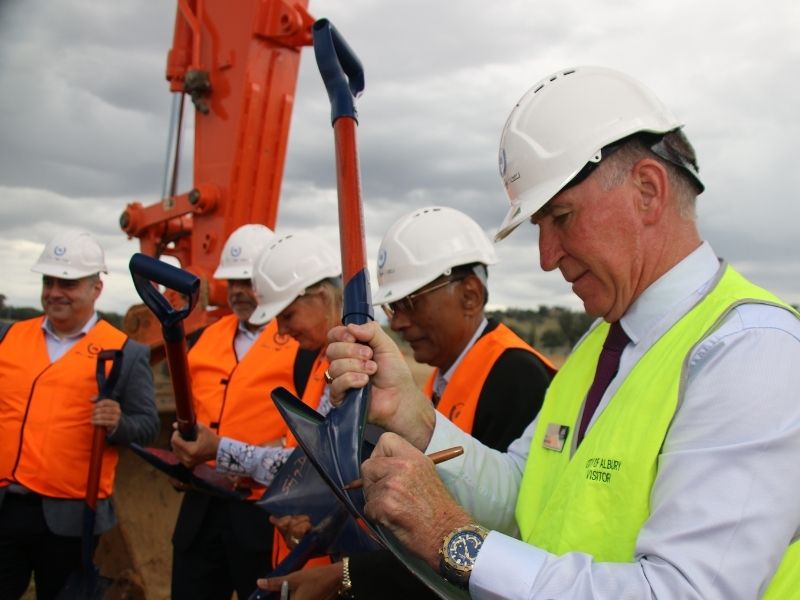 A sod-turning ceremony was held today to mark the start of work on the $45M Circular Plastics plant.

A joint venture between Asahi Beverages, Pact Group Holdings Ltd and Cleanaway Waste Management Ltd, the plant will recycle the equivalent of about one billion PET plastic bottles each year.

The project will create up to 300 direct and indirect jobs during construction, with about 30 people to be employed full time when the plant is open.

AlburyCity Mayor Kevin Mack said it was an exciting day for the future of NEXUS.

“This is the result of a long-term vision to develop NEXUS into a 24/7 industrial centre that will eventually employ thousands of people and inject an estimated $1.5B into the regional economy,” he said.

“We’re delighted to welcome Circular Plastics to the site, which has enormous potential for growth as an industrial powerhouse literally on the nexus of transport routes linking major cities.

“As a leader in sustainability and recycling, AlburyCity is especially pleased to support Circular Plastics, which will produce more than 20,000 tonnes of new recycled PET bottles and food packaging, making it the largest end-to-end plant of its type in Australia.”

Environment Minister and Federal Member for Farrer, Sussan Ley, and the Member for Albury, Justin Clancy, joined Cr Mack in welcoming the joint venture to Albury at today’s sod-turning.

The plant is set to be fully operational by the end of this year.

Cr Mack said Circular Plastics would be among the first of many new businesses that will start-up at NEXUS, creating jobs and investment opportunities that will benefit the entire regional community.

“Thanks to support from the state and federal governments, construction is now under way on the Davey Road interchange that will help to make NEXUS an even more attractive place to develop businesses that will employ local people and help to fuel Albury’s growth over coming decades,” he said.