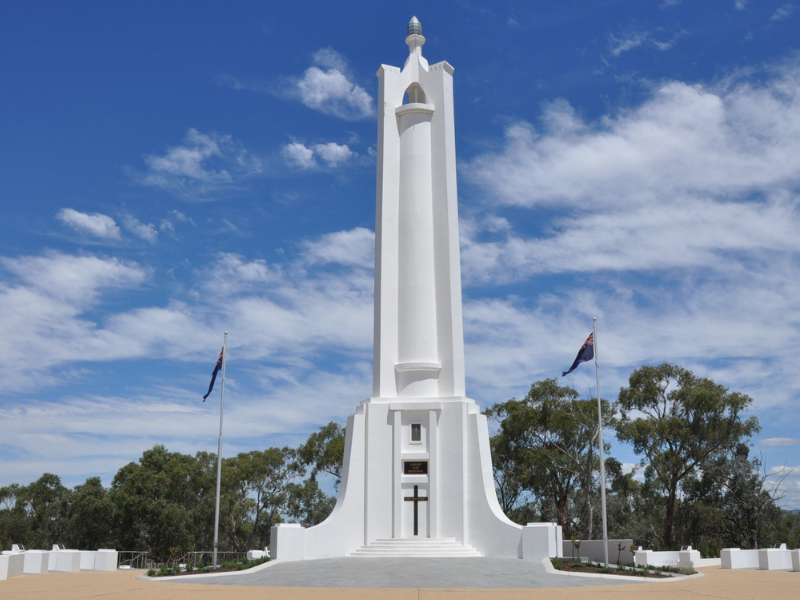 Located at the western end of Dean Street, Monument Hill is one of Albury's most visited destinations with view the City and the surrounding region.

The most prominent feature that sits atop of the hill is the Albury and District War Memorial which pays homage to those who died in service during World War 1. The area is rich in war history and is a special place for the RSL with the annual ANZAC Day ceremonies held at the base of the War Memorial. Bushland surrounds the war memorial with a myriad of wildflowers including terrestrial orchids blooming in spring and summer.

History - In 1915 a visiting town planner, Charles Reade. proposed plans to erect a monument on the western hill to memorialise soldiers fallen in combat. The subsequent siting of a War Memorial on the hill specially acquired by Albury Council at the end of Dean Street remains a good example of bold and imaginative town planning.

The War Memorial - The memorial was erected by the citizen's of Albury and district in memory of those who gave their lives in World War 1, 1914 - 1918. The cost of 3200 pounds was raised by public subscription. The structure is 30.48m (100 feet) to the top beacon and is constructed of reinforced concrete. Al old brewery near union bridge was being demolished at the time. The bricks from there were used to make the curved buttresses. The Architect was Louis Harrison while the builder was Tom Bartleson. The monument was unveiled on Anzac Day 1925 by General JJ Paine. All Three men were citizens of Albury.

Facilities - Monument Hill is Albury's most prominent viewing point with the feature being Dean Street during the Day or night. Scattered through the site are picnic tables, seating, commemorative plaques and walking tracks transect the bushland.