Written by Jane Godwin and illustrated by Anna Walker

Set in the 1970’s, this sweet picture book is based on a true story and is quite thought provoking.

Tilly lives with her parents and her sister and two brothers in their house where there are lots of places to hide. Tilly’s room is at the top of the house, and in her room, Tilly has a secret... a secret hiding spot all of her own... a step that has a secret compartment. Tilly uses this secret compartment to hide treasures: a special book of lists, her best drawing of a bird, a smooth stone she found by the sea, a silver ball with a tiny bell inside, stripy sweets, a letter she had never delivered and four little wooden dolls.

Every now and then Tilly takes the treasures out and plays with them, but she just likes to know that they are there.

After the summer holidays Tilly’s mum and dad decide to do some renovations to the house. They repaint the walls, and re-carpet the house. The colours look great, but as Tilly races upstairs and into her room…. she discovers something is very wrong...Tilly’s secret step has been covered in the new carpet, and the carpet has been fixed in place and cannot be moved. Tilly’s treasures are trapped!

Tilly grieves for her special treasures that she will never see or hold again, but she doesn’t tell her family, or anyone about what she has lost. She can’t find the words to tell them.

This gorgeous story is Jane Godwin’s younger sister’s story. Her younger sister’s name is Cait, and she was about six when her secret step at the family home was carpeted over and her secret treasures became trapped. Cait never said a word to anyone until about eight years ago when she was in her early forties, and then she told her family! Jane loved this story and asked Cait if she could write about it, and Cait said YES!

Jane said that she and Cait have visited their old house in the last few years when it was open for inspection, and that the same carpet is still there...Cait’s treasures are still there..all these years later! Jane asked Cait why she never told anyone about her lost treasures, and part of the reason is that she felt embarrassed, but Jane also believes it was that Cait did not want to share her secret world, her inner life, even when it was being threatened.

When Cait told Jane about her secret step, Jane could identify other themes that could be tied into this story:

Anna Walker loved illustrating “Tilly”. She felt it was a “quiet story”, and so wanted to illustrate it traditionally using ink, paint, pencil and watercolour. Anna painted different items separately and they were arranged on the same page using photoshop. Anna loved using mono printing to create the background on each page. Mono printing is when you paint onto perspex, press perspex onto paper, and peel it back, creating a lovely pattern.

Jane Godwin has written over 20 picture books, and lives in Melbourne with her family. Jane is also the co-creator of the Our Australian Girl series.

Jane and Anna have worked on a number of picture books together.

Anna lives in Melbourne and has illustrated 12 children’s picture books. Her imagery is inspired by the tiny details in the world around her. 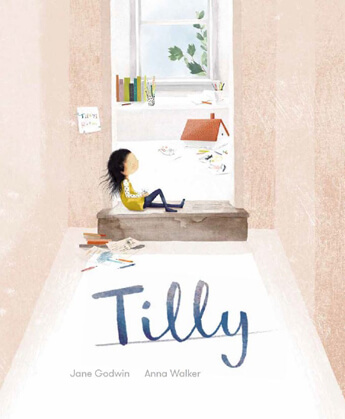