This is an endearing story of a three legged dog named Three, who is homeless, but never in despair, always grateful for what he has: “When the sun was shining, he was warm. If it rained all day, he felt clean...and his waggily tail kept him well fed.” Every day was a skip and a hop for three. Sometimes he looked for a home, someone to love, but mostly he walked to wherever his nose took him.

In this story we see his nose take him on little adventures where he finds a six leg (ant), and an eight leg (spider), and he feels happy for them, that they have a home away from the busy traffic...even though Three does not. How thoughtful, and selfless.

He is also grateful for his three legs when he sees a caterpillar with too many legs to count, and chairs with four legs...two legs (people) sit on those! Three is grateful for the simple things in life, such as being able to go wherever he chooses, and having road sense, knowing to cross the road when the light is green.

Then one day, Three follows his nose far away, to where everything is slower and greener, and not so many cars...a farm! Here, Three meets some other interesting animals, but always refers to them by how many legs they have...this is how Three sees the world.

On the farm, Three also meets a two leg (a lovely young girl), pretending to be a three leg, just like him. This young girl, Fern, looks after Three, and they realize they have a lot in common, in that Fern broke her arm once, just like Three hurt one of his legs.

When Fern takes Three inside to meet her family, she asks Three if he would like to stay with them forever, to become part of their family, and Three is delighted. Fern looks after Three so well, having fun, keeping him warm and well fed...and most importantly, giving him a place to belong, a family to love, and who love him.

Three is thankful for everything.

What a beautiful message, especially in these uncertain times.

Stephen Michael King was inspired to write this story when he came across a three legged dog in the snow, but it took him twenty years to write about it, and when he finally did, the story became one of understanding, acceptance, empathy, being thankful, and following your own path.

“After I’d written Three, I realised that at its core the story was about my older brother David – who was born with Polands Syndrome. I dedicated the story to him”.

David’s right hand and arm are smaller than his left.

“He learnt to do lots of things with his other hand even though he was naturally right handed. My brother and I were always making stuff together. He’s always happy and not much ever gets him down. Love him!”

So you can see Stephen’s inspiration for Three’s journey.

Notice how Stephen uses darker colours to illustrate Three in the city, where he is homeless, even though he is grateful, and then contrast this to the bright uplifting colours when Three happens upon the farm, and is accepted into a loving family.

Notice the detail in every illustration, especially the illustrations of the city...just amazing! 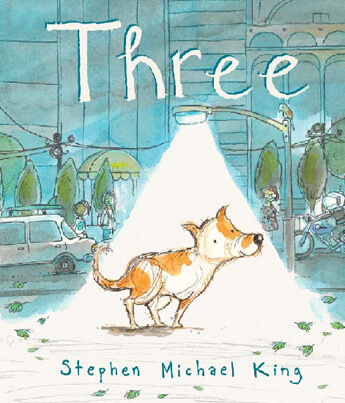