Written by Pierre-Jacques Ober with photographs by Jules Ober

What a powerful picture book for older children. Based on true events, this story is set in 1914, during the First World War, and is about a French soldier Pierre who quietly left his regiment to visit his family for two days over Christmas, but when he returned, he was imprisoned, locked up inside a barn. Pierre was trying to be a good son and a good soldier.

Pierre thinks that because he returned after two days, his sentence will not be harsh, afterall, he left his family in August 1914 to fight the Great War for his country, to stop the enemy, and to make his mother proud.

Pierre reflects on the battles he has fought alongside his countrymen since the war began, and how awful death is in war, but he also reflects on how grateful he is for his good friend and fellow soldier Gilbert, who always seems to be watching over him and putting himself between Pierre and the bullets.

When the colonel visits Pierre in the barn, he regimently delivers the tragic news, that because Pierre left the regiment without orders, he has to be made an example of to the other soldiers, and therefore his sentence is execution...he will be shot tomorrow for desertion (deserting his regiment).

Due to the crime committed, they cannot take into consideration Pierre’s good record. The last thing the colonel says to Pierre before he leaves the barn is “Soldier, I do not salute you”. I truly felt for Pierre to hear the colonel say this, as we know the loyalty Pierre feels to his country, and the sacrifices he has already made. We cannot begin to imagine how Pierre must have felt at this moment.

We then see Pierre spend his last night in the barn reflecting on the love for his mother and family, and on the life he would not get to live. During this time Pierre pens a very moving and emotional letter to his mother.

The narrator tells us that World War One was called the Great War, but it was fought by little soldiers.

One of the striking things Pierre talks about in his letter to his mother is when he came across a group of German soldiers, who did not want to fight anymore and asked if Pierre would take them in as prisoners of war. They had seen enough death, they did not want to kill anymore. Pierre says to his mother “I was astounded. We all felt the same way. War was no different for them.”

A picture book that will move you deeply.

Pierre-Jacques Ober explains at the end of the book that he was born into a military family, it has always been a part of his life, as has military history and playing with toy soldiers or little soldiers. Pierre-Jacques' imagination was nurtured by his maternal grandfather who was a military equestrian master, and a romantic at heart. The stories he would tell Pierre-Jacques were full of historical heroes, adventures, honour and bravery.

Pierre-Jacques paternal grandfather was a highly decorated soldier of the Great War, but sadly passed away before Piere-Jacques was born. In memory of him, and to mark the centenary of the start of World War One, in 2014 Pierre-Jacques decided to make a series of images of his World War One figurines. The centenary also coincided with his father’s eightieth birthday. This project is what led to this amazing book.

Pierre-Jacques did not join the military but studied philosophy, music and films, even dabbling in a little filmmaking. This project has been a way he has been able connect to how these soldiers may have felt.

The illustrations have been created by photography, the photographer being Pierre-Jacques’ very own Australian born wife, Jules. An explanation of the photography process is at the back of the book, where it is explained that Pierre-Jacques and his wife decided to shape the story around the materials they had, and could find, like models and miniatures available at hobby shops.

Another challenge in the illustrations was how to bring emotion to these little plastic men, to bring them to life. Photographic techniques that helped to overcome this challenge are framing (keeps the viewers focus on the framed object), depth of field (distance between the nearest and furthest elements in a scene that appear to be acceptably sharp in an image), using natural light at different times of day, and making digital adjustments to colour and texture. All of these techniques helped to capture the desired emotion with each image and to also create an overall feeling for the story. The process used is similar to that of filmmaking, but in miniature.

Jules is a self-taught photographer who was educated at the Sydney Conservatorium of Music. Jules has worked as a documentary photographer and her photographs have been published in magazines such as Vogue, Elle and Digital Photography.

Pierre-Jacques and Jules in the rainforest in country Australia. 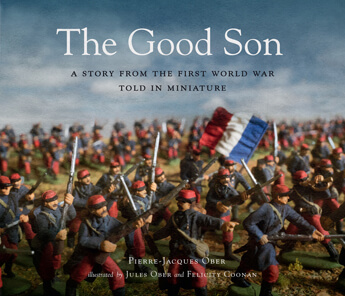