Written and illustrated by Caroline Magerl

An enchanting story about a gorgeous unique little bear who was not plush in places, had lost a lot of his stuffing, and was unloved, living in Oddmint’s Dumporeum, and belonging to no-one.

Each night all the other toys in the Dumporeum worked quickly mending and stitching each other and trying to make each other look bedazzling for the next days’ customers, but not Nop... he was beyond repair. All the mended toys would go home with someone in their own special paper bag, but not Nop, even with his new red bow tie.

Then all of a sudden, Nop has a thought, “A bear in a bow tie can go anywhere, someplace wonderful even!”. If no-one will take Nop out of the dumporeum, he will leave on his own and embark on his very own adventure!

So Nop works hard to stitch together scraps and strings, rags and tassels to create a big balloon to carry him away on his very own adventure….and his very own paper bag has an important job. Where will this adventure take him?

Caroline Magerl has written and illustrated 5 children’s picture books and has been the illustrator of many more children’s books, written by other authors such as Hazel Edwards, Libby Hathorn, Dianne Bates and Meredith Costain.

Caroline’s inspiration for Nop is a beautiful story on its own. Her daughter had deliberately sewn her dad a dishevelled looking teddy and given it to him as a joke for his birthday. He was named Roadkill. One day Caroline decided to draw the bear her daughter made, and he was given a new name, Nop, which is the noise their daughter made when she was three and was being stubborn. The drawing then went into “The Pile” which are drawings Caroline has created, and not yet written about. Nop sat there for five years.

Caroline’s ideas for Nop grew slowly, and beautifully. The idea of the Dumporeum came from Caroline’s own childhood, when she was eight and would spend time at a peculiar dump on the shores of Blackwattle Bay in Sydney, discovering all sorts of treasures, from costume jewellery to wardrobes.

One of the themes Caroline has woven into Nop is the anxiety of not fitting into the world around us.

As a child, Caroline grew up on a yacht her father built, and she thought her father was invincible, but felt her mother was always anxious.

Caroline decided that when she grew up, she would live in the wild, so there would be no anxieties and she would not have to live the rest of her life on a boat, so she packed a bag of things she would need, which included a compass, a can opener, a knife, needle and thread, and a book about how to survive in the bush. The adult world can look scary to kids.

Caroline says: “When I wrote ‘Nop’, I was much in mind of the anxiety of fitting into the world and my childhood plan. Eventually, there was to be no bush camp for me, no place of refuge. My bag of things were after all useless, except for the can opener … I still use that. However, I’ve kept all those things and they remind me of something important; about how bewildering and uninviting the adult world can appear to children”.

There were many influences in writing Nop. Caroline says:

“Ideas may not look much at first glance, arriving as they often do out of the blue. But it’s how we nurture them, that gives them the chance to fly”.

Caroline is a wonderful example of how stories can grow from our memories and from inward reflections and feelings.

Caroline says she wrote the ending to Nop numerous times, but she knew Nop had to come down from his flying adventure at some point, and she wanted him to find acceptance, love and a place of belonging when he did. This was her inspiration for the beautiful ending.

Caroline has painted her gorgeous illustrations with watercolours. 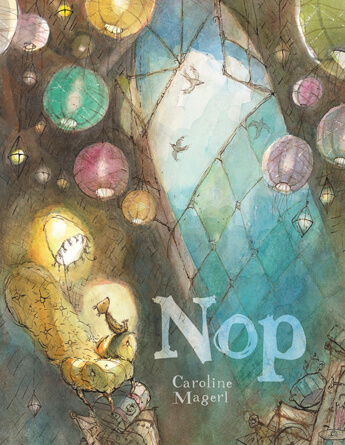