Written and illustrated by Sophie Blackall

A delightful story that also shares some information and history about lighthouses. We are not told what year this story is set in, but we know it is set before 1920, probably early 20th century, and probably spans about a decade. There are also other hints in the book as to the time period, such as the characters' dress.

“On the highest rock of a tiny island
At the edge of the world stands a lighthouse.
It is built to last for ever.
Sending its light out to sea,
Guiding the ships on their way”.

Almost poetic, the text is gentle and calm, and you feel that you are sharing something special.

The story begins with a new lighthouse keeper moving into the lighthouse, and we see all the important jobs the keeper has to do in this oil lamp lighthouse, such as polishing the lens of the light, refilling the lamp with oil, trimming the burnt end of the wick, and winding the clockwork that keeps the lamp in motion. Another important job is to keep a logbook of everything he does, and everything that happens.

The story takes us through the keeper’s life while living in the lighthouse, including having the tender (someone who brings supplies and guests to the keeper in the lighthouse via boat) bring his wife to live with him, rescuing a shipwrecked crew, suffering through a bad illness and the birth of their first child. The keeper also records changes in the weather as the wind blows, the fog rolls in, the seasons change, and they even see the green glowing northern lights.

Then one day, the coast guard sends a letter to say that the keeper will soon no longer be required as the coast guard is coming out to install a new light which will be run by a machine.

The story finishes with the keeper and his wife and daughter (who is now a young child) waving goodbye and moving out of the lighthouse… but not too far away.

An interesting feature about this picture book is the note from the author at the back which details some history of lighthouses, and we are told that electric lights began to replace oil lamps in the 1920’s.

Sophie’s inspiration for this picture book came about after she was at a flea market and saw a picture of a lighthouse on the northern tip of Newfoundland.

Sophie has produced these detailed yet soft illustrations using Chinese ink and watercolour. Sophie has illustrated over 30 children’s books, including the “Ivy and Bean” series, and she has been the author and illustrator of 3 children’s picture books.

Although Sophie is Australian, she currently lives in Brooklyn, New York. 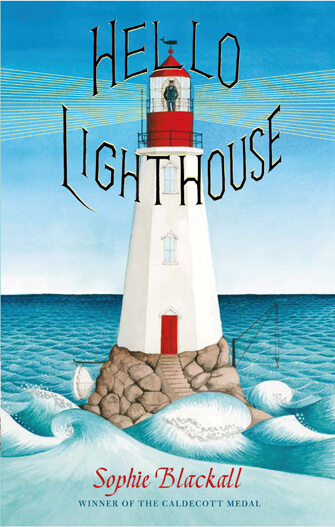