Written and illustrated by Tohby Riddle

This is a very clever information book about the sightings and encounters with yahoos (hairy men, known today as yeti’s) during Australia’s colonial history. This entire information book is told using extracts from old newspaper reports from early European settlers, of yahoo sightings. Check out the endpapers, created from some of these reports.

Due to the sheer number of reports Tohby came across in his research, he decided to see if he could construct the text for this book, using nothing more than selected extracts from these reports.

Because of the significance of the hairy man to Aboriginal peoples, Tohby consulted Peter Williams, a Ngiyampaa Elder from north west NSW, which added richly to Tohby’s research.

Tohby decided to include a series of Peter’s statements as part of the text, and believes they have a powerful impact. They are a great contrast to the reports from the European settlers.

We learn from Peter that Aboriginals call the hairy man Berai, and that to his people the Berai is a spiritual figure with a physical body. Aboriginals also believe in a smaller hairy man, called yuriwirrina, only a few feet tall. Peter says “If someone escapes from a hairy man it is because he let them go!”.

Tohby came up with the book’s title “Yahoo Creek” after he discovered that this place name had been used at least five times along the Great Dividing Range, in Victoria, NSW and Queenlsand. According to the study of place names, places can be named after famous people, a geographical feature, or an incident. This got Tohby wondering if Yahoo Creek had been named after an incident, and if so, what incident? According to old maps and gazetteers, the name “Yahoo Creek” had been used multiple times at the locations of alleged sightings and encounters, so it seemed to be the perfect name for this book.

Tohby also researched to produce the beautiful illustrations and artwork, gaining inspiration for his colonial illustrations from photos from Australian colonial times and Australian painters who were contemporary in these times.

Tohby’s artwork techniques are very clever. To create the Australian bush, Tohby took lots of photos of the bush, and carved rubber stamps of these images, which he then used repetitiously to recreate the bush.

To illustrate the yahoo, Tohby used the method of stencilling, rather than stamping. He produced his own stencils of the yahoo, and colonial scenes and used sponges to apply the ink. This gave the illustrations a soft haze and an apparition-like feel.

Tohby Riddle is the author and illustrator of over 20 children’s books, such as “Here Comes Stinkbug” which won an honour award in last years’ Children’s Book Week Early Childhood Picture Book category.

Tohby is proud that “Yahoo Creek” is the first of his books to feature the Australian landscape so full and beautifully. 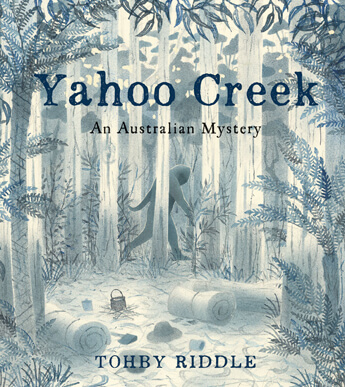