Written and illustrated by Jess McGeachin

Fly is a gentle story of a young girl named Lucy, who loves to fix things. Lucy lives with her father, and Jess’s emotive illustrations provide us with hints that Lucy has just recently lost her mother.

Lucy has always loved fixing things, and now that it is just the two of them, Dad needs a bit of extra help. When Lucy finds an injured common sparrow behind the garden shed, she believes she wants to fix him too. Lucy names him Flap.

When Lucy’s dad takes a closer look at Flap, he gently explains to Lucy that Flap has a broken wing, and will not be able to fly again, but Lucy is determined that she can fix Flap, and goes to extraordinary lengths to try to...Lucy builds Flap a plane, so he can fly!

Lucy’s plan doesn’t quite work out, leading her and Flap into danger, but luckily a flock of birds come to the rescue and among this flock is every type of bird you could imagine.

Lucy is so disheartened when she cannot help Flap, and her dad gently explains to Lucy that not everything that’s broken can be fixed, but it’s the thought and the effort that counts.

Although the loss of Lucy’s mother is not mentioned in the text, Jess has told this story through the illustrations, and we can feel the grief and loss that Lucy and her father are feeling. Lucy could not fix her mother’s illness, and this makes her all the more determined to fix Flap.

After Lucy loses Flap, she has grown through her grief. Lucy and her dad love spending time together, whether it’s fixing things, or just watching the birds in the garden. They have each other.

At the back of the book Jess has included a double spread of the many different birds that helped Lucy and Flap. Notice the sparrow, and how Jess has written “Common Sparrow”, but then crossed out the word “Common”. There was nothing common about Flap. He was special to Lucy.

Jess McGeachin is an author-illustrator based in Melbourne. Fly is his first children’s picture book.“The Lost Library” and “Colin Collects Colours” will be released in September this year.

Jess has drawn and painted his illustrations with watercolour. Jess says:

“I spent a lot of time researching and sketching rare and colourful birds for this book. While the story is fiction, I wanted the reader to be able to learn about amazing birds that exist in our world. Designing the way the main character looked and moved was also very important - I wanted her to feel curious and clever while still being vulnerable and human.”

Jess has told this story beautifully, using both text and illustrations. The illustrations really do add to the text, especially the facial expressions, and the soft pastel colours Jess has used. 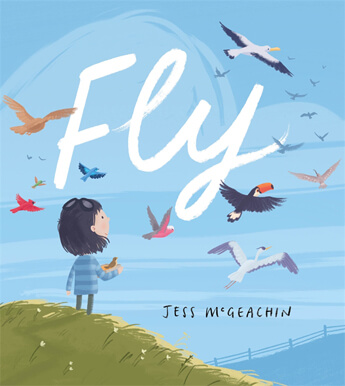