The Thing About Oliver

Twelve year old Tilly lives with her mum, and 8 year old brother, Oliver, or Ollie, who is autistic. Ollie’s autism places a lot of demands on Tilly’s mum and herself, especially when he has one of his meltdowns. Tilly’s mum also has to take him to weekly therapy appointments.

While life is busy and exhausting, Tilly holds on to her dream of being a marine scientist one day. She has a passion for all sea creatures and has already learned quite a lot about them. Tilly also loves to draw them and has started writing her very own book about sea creatures in an aqua coloured journal her mum gave her. Tilly loves this journal, with its pretty aqua material colour and its delicate aqua ribbon, which acts as a bookmark.

Tilly wishes she could share her passion for sea creatures with her mum, but often when she tries to, she can see her mum is either really exhausted or her mum (and often Tilly) needs to attend to Oliver.

Oliver’s autism means that he sees the world very differently, and it is hard for him to connect to other people. His senses are a lot more heightened, which makes him super sensitive to the environment around him. He has very good eyesight, excellent hearing, but super sensitive skin. It means that what would appear to others as a small issue, is a huge deal to Oliver, for example, he can only handle the feeling of soft cotton on his skin. The feel of polyester on his skin will cause him to have a meltdown, where he screams and shrieks. Ollie is also very sensitive to change. Any small change can drive him into a meltdown.

Tilly loves her brother, but sometimes she doesn’t always like him. Tilly feels like her mother spends all her attention on Oliver, and she feels like she is made of glass, that her mother just sees through her, rather than truly seeing her for who she is.

When Tilly’s mum loses her job, she decides to move their little family far away to her sister’s house in Townsville, Queensland. Tilly hasn’t seen her Aunt Janine since she was very young, but Aunt Janine wants to help with Oliver.

Tilly is worried that such a huge move is going to take a huge toll on Oliver, especially that the people delivering his therapy each week will be different, and Oliver will have to get use to them all over again. Tilly is also worried that Aunt Janine’s house may not be “Ollie proof”. Ollie needs a fence out the front and back so that he can’t run off, Aunt Janine will need to put away anything breakable, or Ollie will most likely break it, and Ollie can’t handle certain smells, such as perfumes, it can send him into a meltdown.

Tilly is also wondering if she will have her own bedroom at Aunt Janine’s, and if so, will it have a lock on it? Tilly has to lock her bedroom door so that Oliver doesn’t go in and ruin her aqua journal or her other books about sea creatures. He wouldn’t mean to, but part of Ollie’s autism is that he loves paper and tearing it into tiny pieces. Therefore Tilly needs to keep her information books on marine creatures and her aqua journal safe. She keeps the key to her bedroom door around her neck. Hopefully Aunt Janine will let her do the same thing.

Tilly’s mum is really looking forward to a fresh start, and she tries to encourage Tilly to be positive about their new move by reminding her that they will be living near the beach...near the Great Barrier Reef, and that she will definitely learn to swim...something Tilly has always wanted to do. Then, one day she may be able to snorkel or even scuba dive in the Great Barrier Reef and see all the sea creatures she has learned about...and become a marine scientist.

When they arrive at Aunt Janine’s, chaos breaks out almost immediately, as Aunty Janine does her best to support her sister, niece and nephew, with no knowledge or understanding of autism and having never had children of her own.

As they do their best to settle into their new home, it becomes clear to Tilly that nothing has changed, all her mother’s time and attention goes to Oliver...and this leads to a very moving and dramatic climax that will pull at your heart strings.

The title: “The Thing About Oliver” is very endearing, as you lose count of the number of times Tilly tells us, “the thing about Oliver, is…”. Even though Tilly is frustrated by her brother, she does love him, and out of everyone...it is Tilly that knows him best.

A beautiful endearing book, that reminds us of how siblings of children with special needs can be overlooked. A reminder of the struggles, and emotions that affects the entire family.

In Deborah Kelly’s own words:

“I have the privilege of knowing several children on the autism spectrum and their families. There is a lot of support out there now for kids on the spectrum, which is fantastic. But often the siblings of these children are overlooked. They are sometimes called glass children, because it can feel as though their overstretched parents look right through them. They have to grow up quickly, are often expected to take on far more responsibility than other kids their age and can feel guilty about their own problems and worries in comparison to that of their siblings. They can also struggle with feelings of resentment and guilt towards their parents and the sibling with special needs.

Deborah Kelly has written a number of children’s picture books such as “Bouncing ball”, “Me and You”, and the Ruby Wishfingers chapter book series for young children. Deborah grew up in New Zealand and Australia, and she has also lived in Scotland and Japan. She wrote her first series of children’s books when she was only seven years old (and she still has them!).

Deborah lives in New South Wales with her husband and two children. 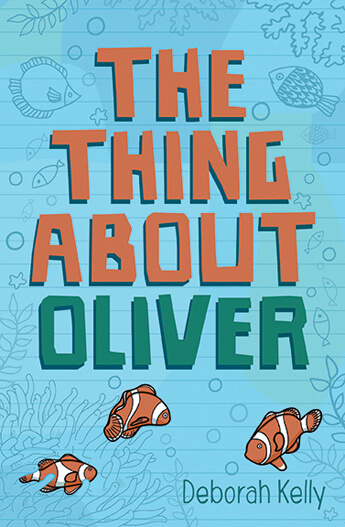