The Secrets of Magnolia Moon Review

Written by Edwina Wyatt and illustrated by Katherine Quinn

Magnolia Moon is nine years old, and this beautiful story follows Magnolia through a year of her life, until she is almost ten, and the changes that Magnolia learns to adapt to. In each chapter Magnolia has a secret to share that tells us a little bit about the beauty that is Magnolia.

Magnolia is an only child, who loves her parents, Atlas, her pet cat, her friend the moon, who always greets her outside her bedroom window at night, greek mythology and her best friend Imogen May.

Just before Year 4 starts Imogen and her family move about an hour away, which means that Imogen will be going to a different school. Both Imogen and Magnolia are nervous about beginning Year 4 without their best friend. Between them their imagination is bountiful.

As Magnolia is just getting used to school without her best friend, she finds out another change is on the way...her mother is pregnant...in six months Magnolia will have a baby brother. Magnolia is excited, as she always enjoyed playing with Felix, Imogen’s baby brother.

A gorgeous story which deals with a number of themes: friendship, family, siblings, change, imagination and growing up.

How will Magnolia feel when her baby brother comes along, and how will things change? Will she enjoy being a big sister?

This is Edwina Wyatt’s debut junior fiction novel. She is an accomplished author of children’s picture books with titles such as “Sometimes Cake” and “Ponk”. Edwina has worked as a lawyer and high school teacher and lives in Sydney with her family. 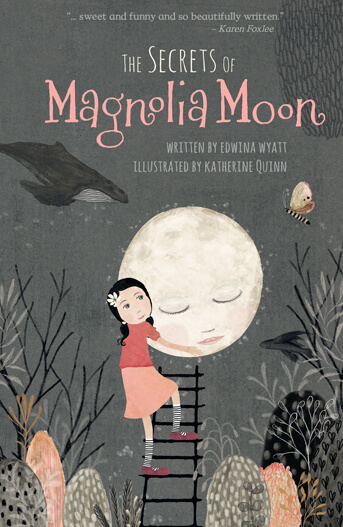