A contemporary verse novel, The Little Wave is set in Sydney’s Northern Beaches and a fictional rural NSW town called Mullin. It is the story of three grade five children - Noah, Jack and Lottie, and their different struggles, and how they are brought together by a terrific school project.

Noah loves living on the Northern Beaches, the beach is his backyard. He absolutely loves surfing, even though he almost drowned in the surf as a small child. He loves the way it makes him feel: excited, happy and scared, all at once. The biggest struggle for Noah is his so-called best friend, Harley, who bullies him in every activity they do together, especially surfing, where Harley is always trying to steal Noah’s wave and has to make everything competitive. This ruins Noah’s feeling of being one with the waves.

Noah goes to school with Lottie, a quiet and shy girl in his grade, who has no friends. Noah and Lottie are paired up in class to organise a fundraiser to bring a grade 5 class from Mullin to the Northern Beaches. Each student in Noah and Lottie’s class is paired up with a student from the grade 5 class in Mullin, to be pen pals, leading up to their visit to the Northern Beaches.

Lottie loves bugs and collecting facts about them, but she feels very lonely. She lives with her dad, who is grieving the loss of his wife, Lottie’s mum, who passed away over twelve months ago. Lottie misses her too, but her dad is struggling with his grief. He is hoarding everything and cannot let go of anything that might remind him of the love he lost.

Lottie’s dad’s hoarding is to excess, where she cannot even sit on the couch, or find room on the kitchen bench to do her homework, for all the clutter her dad is amassing. All the clutter and junk has even overflowed to outside, where the front yard now looks like a tip, with old fridges and boxes and rubbish everywhere. It has got to the point where neighbours are complaining and leaving nasty letters in their letter box.

When they have tried to clean up, it upsets Lottie’s dad too much. What is deemed junk to others, is very important to Lottie’s dad.

For this reason, Lottie cannot have friends over, she hardly has any friends these days anyway, she feels so isolated.

Then Lottie is paired up with Noah for the fundraiser. She enjoys getting to know Noah and gets an insight into his troubles with Harley. Can Lottie now class Noah as a friend? Or is Noah ashamed to be friends with Lottie in front of Harley and the rest of the class?

Jack is in grade 5 in the rural town of Mullin. He is obsessed with cricket, and really wants to be a cricket star one day, but he has to improve his grades and attendance at school, especially if he wants to see the ocean for the first time. The kids that get good grades and put in the effort this term, will get the chance to go on an excursion to Manly, to visit the beach and learn about beach safety. Jack is determined to be chosen. It’s not easy though, when his mum is always sleeping, and his older cousin, Alby, is always encouraging him to skip school and play cricket or go to the river instead.

Thankfully, Jack has all the encouragement he needs in the letters from his  new pen pal, Noah, (a grade 5 from the Northern Beaches). Jack loves getting letters from Noah, and each one makes him want to see the beach even more...and meet Noah, and his friend Lottie.

Lottie’s pen pal ends up being the grade 5 teacher from Mullin, who she is allowed to call “Jess”. Jess’ letters are a great companion to Lottie.

As the day of the excursion draws near, Noah, Lottie and Jack all have their own struggles to deal with, but they also have their friendships with each other…

Will Noah learn to stand up to Harley? How will Lottie help her dad to overcome his grief? Will Jack get chosen to go to Manly and see the beach and his pen pal for the first time?

This novel is told in verse form, each chapter being told by one of our main characters, Noah, Lottie or Jack. The various themes tackled includes: friendship, family, grief, bullying, courage, teamwork, community, recovery, and acceptance.

“The Little Wave” will be enjoyed by boys and girls alike, a terrific read! 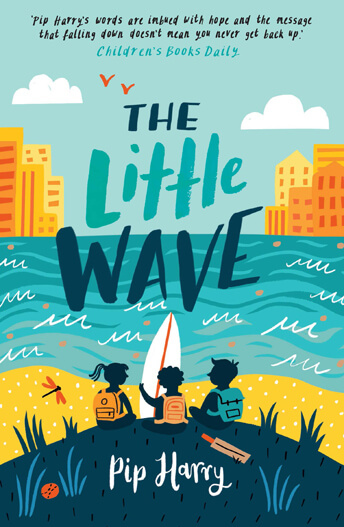