Written by Emily Rodda and illustrated by Marc McBride

Another fantastic book by Emily Rodda, packed with limitless imagination and adventure. This book stands out from Emily’s past novels in that the illustrations tell the story almost as well as the text, and paired together, Emily and Marc have created something magical.

Finn lives in the village of Wichant with his grandparents, who treat him poorly. He loves sketching, especially sketching dragons. He creates his sketches in a sketchbook he found in the attic, amongst items that belonged to his dead mother.

Finn is approached by Mistress Fay, asking if he has seen her daughter Lori, who has been missing for three years. Mistress Fay is awestruck by Finn’s drawings of the dragons and says “I think you do draw what you see…you see beyond the veil. Have you seen my Lori?”

Finn thinks Mistress Fay is a little mad, with no idea what she means by the veil.

When his grandfather tears up his sketchbook and throws many of the drawings in the fire, angry that Finn has been out sketching again rather than helping around the house, a mysterious character appears…the housekeeper from Edge House. She is very mysterious looking, and upon seeing Finn’s sketches, buys Finn from his parents with pieces of gold.

The Housekeeper takes Finn in her carriage back up to Edge House, a very eerie manor on the edge of a cliff. The Housekeeper takes Finn into the gallery, a mysterious room with a glass roof, and seven large panels painted with extraordinary scenes of fantasy: dragons, a mighty castle, monsters and a beautiful palace. At the bottom of each panel there is no artist signature, just a title of sorts.

When Finn asks the Housekeeper who painted the panels, she answers “The Master”. The Housekeeper orders Finn to study the paintings and copy them. When Finn argues, she is cold and firm that Finn will do as she says, for she has paid good money for him.

When Finn settles in his room for the night at Edge House, he discovers a book belonging to a “Lori”, and wonders if it is a coincidence, or could it belong to Mistress Fay’s daughter, Lori, who is missing? When he queries the book the following morning in the gallery, the Housekeeper says: “She was here for a time…but she left and did not return. She was a failure, like the others”.

Finn starts his work, trying to copy the paintings, but The Housekeeper is not impressed, and tells him to “look deeper”.

One night when Finn cannot sleep, he wanders back into the gallery and beholds the first painting….”Behold the Glimme, where dragons fly….” He looks deeper and feels a great longing wash over him… ”And see a wondrous tale unfold”. He lets himself go deeper…..and gives himself up to the Glimme.

The Glimme is another world, where the main island is divided into territories. Each territory is ruled by a chief.

When Finn realizes he had somehow come into the painting, he is confused, because the painting itself is peaceful, but the scene he is facing is one of battle, with dragon fire. The dragons are attacking. Finn is plucked to safety by a big burly soldier named Wolf, and a young girl hiding in a cavern with a few others. The young girl knows how Finn came to be in the painting, and befriends him, telling him that he needs to choose a name for himself. He cannot use his real name because it is believed in the Glimme that anyone who knows your true name has power over you. So after learning that Finn likes to draw, the girl names him Penn. The girl’s Glimme name is Lark.

After taking refuge in a cavern overnight, Finn and Penn travel to Castle Nye, where Finn sees many villagers taking refuge and hears people arguing about the battle. Finn tries to make sense of everything. When he sees a door leading into another room, he leads Lark inside so that he can ask Lark about what is going on and why the dragons are attacking.

Lark explains that the dragon wars were caused by a Wizard named Rune. He was charming, a great traveller, very well liked. However he started to win over the dragons (most of the dragons live on Orin’s Tor), who always kept apart from the other tribes of Glimme. Rune spent more and more time on Orin’s Tor and the dragons came to admire him…especially their queen. This wasn’t enough for Rune though. He found out the queen’s real name, and this gave him power over her. At least this is what the dragons say must have happened. Rune convinced the queen to leave Orin’s Tor with him, and neither of them have been seen since. Lark explains that it appears Rune just did this for fun, to play with power.

It is during this time when Lark is explaining the situation to Finn, that all the chieftains of the valleys enter the very room they are in, to meet for their Great Council Meeting. The chieftans of the different territories are incredible! There is a huge lion, like in one of the paintings, one chieftan is half horse-halfman, armoured men, even a monstrous creature.

The purpose of the Great Council Meeting is to decide how to stop the dragons attacking Glimme. There are two options put before the council, one is to allow Professor Bravo to use Dragons’ Bane, a poison he has concocted which will kill all the dragons. Not everyone in the council agrees with Professor Bravo’s suggestion, as the dragons have been driven to seek revenge for something one of their own has done.

However the second option is from a Captain in the Nye army, Teller. He urges the council that they must not consider such cruel and desperate acts until they have done everything in their power to make peace. The council all know that the only way to make peace with the dragons is to find Rune, and in turn, find their queen, and the council protest that this has been tried before and Rune cannot be found. Teller replies:

“That is because no one has looked in the right place…no one has searched the seas of the Eastern Zone, beyond the Isle of Hinde.”. Teller is willing.

The Eastern Zone is extremely dangerous, territory of the giants, even the dragons keep clear of it. Also it is forbidden to go there, by a very old treaty. To go there is death.

Teller urges that the mission can be kept secret from the giants, and he would have only a small party of travellers with him, to the Isle of Hinde. They will travel on the Sea Witch… Rune’s old ship, a ship that guides itself by magic.

The decision is made in Teller’s favour, however Professor Bravo insists on going along, in case he can be of assistance, and he can manage the flickers (small dragon like creatures) that can carry news back to Nye. They only give Teller till the rise of the next full moon – one month- to accomplish his mission. If there is no word from Teller by this time, they will use the Dragon’s Bane invented by Professor Bravo. Although not all the councillors are happy, they all agreed.

It is at this point that the chieftans discover Finn and Lark hiding, and realize that they have heard the entire council meeting. Therefore it is decided that they too will travel with Teller, so that they do not get a chance to tell anyone about what they have heard.

And so begins the journey to the Isle of Hinde, an adventure like no other Finn could ever imagine. The team Teller is travelling with is small: Soldier Wolf, Spark (Wolf’s companion), and a cheery young soldier named Cal. Also, ofcourse, Professor Bravo, Lark and Finn.

As Finn embarked on this journey he was being forced on, he worried about the Housekeeper. If Finn had been able to cross over into Glimme, then surely the Housekeeper could too? Would she be after him?

The journey that awaits them is full of peril and surprises…both pleasant and terrifying.

Will they reach Isle of Hinde and find Wizard Rune and the Dragon Queen in time?

Will they put an end to the dragon wars?

What will become of young Finn?

A wonderful book, where the illustrations have you captivated as tightly as the text.

Emily Rodda is an incredible Australian Children’s author. She has written a number of gripping fantasy series and she never seems to run out of ideas! Emily grew up in Sydney’s north Shore. Her real name is Jennifer Rowe, and she writes adult mystery fiction under her real name. Emily’s first book “Something Special” was published in 1984.

Marc McBride was born in Northern Island, and he is known for his fantasy illustrations. He also illustrated the Deltora Quest series by Emily Rodda. He has illustrated 200 book covers, ten picture books, countless magazines. He draws all his illustrations and paints them with watercolour. 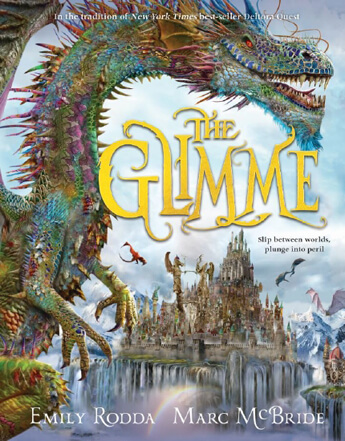