This story is set a few years into the future where Australia has been overcome by a terrible fungus which has killed all the grasses, plants and crops country wide, which in turn is killing the animals, and leaving people with limited food, so much so that the country has resorted to rationing.

Ella is ten years old, and lives in a tiny upstairs flat with her mum, dad, her half brother Emery who is fourteen, and their three huge dogs (or doggos as they call them). Ella is waiting for her mum to come home. It’s been eight months. The day the food ran out, only non-essential workers could leave their work, but that did not include her mum, as she works in solar power.

Now Ella’s dad has gone out in search of Ella’s mum, leaving Ella and Emery with their three dogs: Maroochy (a malamute and black shepherd dog) is their biggest dog, and then there is Bear and Wolf. Ella’s mum, Jackie, is not Emery’s mum. They have the same father though.

Emery’s mum lives with her parents on their land, outside of the city. Emery’s mum and her parents are indigenous and her dad, Emery’s grandad, knows a lot about grass and the land. Emery believes that his grandad can lead them through this devastating time. He tells Ella that they will both starve if they stay in the city, waiting for their dad and Jackie. We get a look-in to Emery’s indigenous culture as he talks about his ma and grandparents.

Ella is very hesitant about leaving without her parents, so Emery suggests leaving a message so that if Ella’s parents return home, they know that Ella and Emery have gone in search of Emery’s ma. Ella’s dad told her that the people who survive when the world turns upside down, are the people who learn to walk on their heads, and Emery reminds Ella of this. This is Emery’s way of saying that to survive, you have to be brave and do things you wouldn’t normally do...would normally be afraid to do.

So Emery and Ella embark on their journey with their three dogs, (which soon become five), and a dry-land dogsled. As they embark on their journey into the wild, dry and barren landscape, they soon realize that no-one can be trusted. Everyone is out to protect themselves, even if it means harming others in the process...or worse.

With no food and water, Emery and Ella rely on roos and possums to feed off, and any water they can find, not just for themselves but for the dogs too who are working together to pull the weight of the sled plus Ella and Emery. Also, they all need their rest after a while. Luckily they have packed the tent, and sleeping bags.

There are a number of challenges and dangers that lie ahead for Ella, Emery and their dogs, but when Emery is shot at and injured Ella is forced to step up and take control of the dogs and their direction. She must lead the way closer to their next meal and water, and ultimately to Emery’s Ma and his grandparents… but how long is their journey going to take? Will they get there? Will Ella’s parents find them?

This book makes you think about our country’s resources, and how important it is to look after them.

Bren MacDibble was raised on farms all over New Zealand, so is an expert about being a kid on the land. After 20 years in Melbourne, Bren recently sold everything, and now lives and works in a bus travelling around Australia. In 2018, How to Bee - her first novel for younger readers - won the Children's Book Council Book of the Year Award for Younger Readers, the New South Wales Premier's Literary Award Patricia Wrightson Prize for Children's Literature, and the New Zealand Book Awards Wright Family Foundation Esther Glen Award for Junior Fiction. Bren also writes for young adults under the name Cally Black. 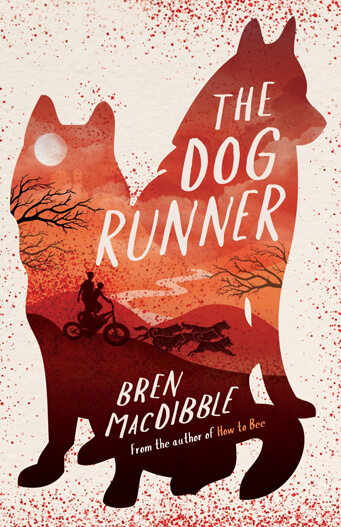