What a beautiful coming of age novel about the power of love in a family, set in a small town in south west Western Australia. Twelve year old Frankie lives with her mum and her eight year old brother Newt, who is obsessed with Skylab, and its inevitable re-entry to the earth. Skylab was one of the first space stations, and it is worldwide news that it is now falling from the sky and will enter the earth’s atmosphere very soon.

Skylab has two orbit paths over Australia and NASA thinks that some of Skylab may break up over Western Australia, but has assured Australia and the world that there is very little chance of it landing on civilians as the world is made up of 70% water.

Newt was born on the same day as the launch of Skylab, April 15th (but two years earlier). This is one of the reasons why he feels he and Skylab have a very special connection. The other reason is that his dad, who died six years ago, when he was only two, and Frankie six, was an amateur astronomer, who was also obsessed with Skylab. He built them their very own Space Shack in the backyard, where they had a really big telescope to see space with, and he was collecting lots of newspaper articles on Skylab to show Newt when he got older….only sadly he never got the chance. Their dad died in a plane crash six years ago, on his way to an astronomy convention in South Australia, but tragically his body was never found.

Frankie misses her dad so much, and bears a lot of responsibility around the house now, especially looking after Newt, while her mum works long hours as a nurse at the local hospital.

Frankie is fortunate to have her best friend Kat, who is in the same class as Frankie at school. Kat is great company, and she has a confidence about herself that Frankie envies. Kat is so good at school work, especially when they are given projects to do, and Kat works tirelessly to get the best mark she can. Their present project is to give a speech on their future selves, what job they will be doing...Frankie can not deal with this right now, she has no idea what to say to the class….has no idea what she wants to be in the future… or does she?

Kat is feeling like she and Frankie never get time together, just the two of them. She feels like every time they are together, Newt gets in the way. Frankie has to help him or watch him, or he just interrupts...not that Kat doesn’t like Newt, it’s just getting frustrating for her as Frankie’s best friend. Frankie is picking this vibe up from Kat, with different hints she is dropping, and Kat’s mood. The only thing is...Newt is Frankie’s brother...and he’s only eight.

Frankie has never got over her father’s death, and now she feels like her mum is burying their family’s memories of him, as she has put away all the photos of her dad, sold their big telescope and locked up the space shack and no-one talks about dad anymore. Frankie just wants someone to talk about her dad, and she is sick of hearing people say that she and Newt will “bounce back”.

Newt is also missing his dad, and even though he loves science, we see magical thinking pitted against science in the way he thinks his dad may still be out there somewhere, and that skylab’s return might bring him back to them. We learn that this is what is driving his determination and obsession with skylab.

The internal dialogue from Frankie is beautiful, and honest.

The climax of the story is powerful in that Frankie, Newt and their mum discover the importance of communicating with each other, and not bottling things up.

Regularly between chapters Frankie contemplates “Things that fall from the sky”, where we learn more about Franki’s dad, and their family and what they have been through and are still going through, and the deep affect this has on Frankie. These inserts have also been written in a different font.

Meg McKinlay’s inspiration for this novel was her own memory of Skylab, she was only eleven in 1979 when it re-entered the earth. Meg says:

“I wrote this book because I’ve never quite shaken my 11-year-old self, because that time when Skylab was falling was surreal and terrifying and fascinating, and so many things all at once.”

At the heart of this story is the message not to give up hope, belief and magical thinking, even when they are pitted against science. Such beauty, heart and love can grow when we do this. 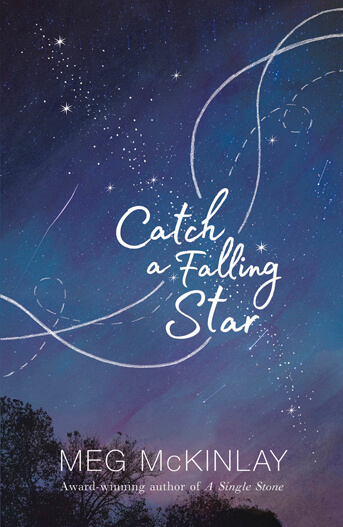