Written by Frances Watts and illustrated by A. Yi

A delightful picture book about a friendship between a lovable dachshund named Fred and his best friend.

Fred does a lot of things that his best friend thinks are rather disgusting, or simply does not understand, but even though they are different, they are the best of friends.

Upon reading this book look at the illustrations carefully, they give a clue as to the surprise ending!

Upon reading this book, check out the endpapers. At the front is Fred, having lovable fun, like dogs do, and at the back, is Fred’s best friend, doing what he enjoys best..

There are a few children’s toys illustrated in the book, so we know there is a child in this household, and it's easy to suspect that the narrator is the child.

There is a little blurb at the back telling us about Frances Watts, that she has written more than 25 children's books. These include “Kisses for Daddy” which was a CBCA Honour Book for the Book of the Year: Early Childhood category in 2006 and Parsley Rabbit’s Book about Books”, which won CBCA Eve Pownall Book of the Year in 2008.

There is also a blurb included for the illustrator, A. Yi, (A is for Anne) telling us that she is also an animation artist who has illustrated various children’s books, including the Alice Miranda series by Jacqueline Harvey.

A fun and lovable story! 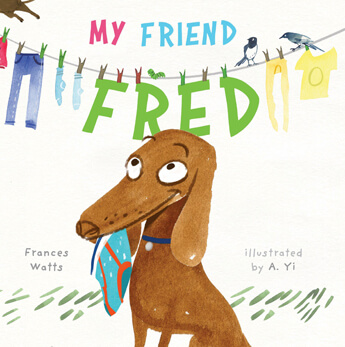