Written by David Metzenthen and illustrated by Mairead Murphy

An adventurous story about a little rabbit, Lulu, who accidentally escapes the safety of her backyard one evening, with her mouse companion and finds herself in the local suburban neighbourhood, surrounded by other houses with families, cars and she checks out these mysterious new surroundings.

It isn’t long before Lulu meets….one hungry fox, who is trying to catch and eat Lulu for his dinner! She runs back to the safety of her backyard as soon as she can...but she isn’t even safe here...cunning fox follows her into her yard. How Lulu hides from fox is very clever and funny, kids will have a laugh.

It is interesting to note that when fox starts to chase Lulu, we no longer see her mouse companion. We are left wondering where she scampered off to?

Metzenthen’s simple text (three words) on most of the double spreads (apart from four spreads where there is no text at all) marries beautifully with the gorgeous illustrations by Mairead, that tell us so much more!

Each page starts with the word “One”, except the last page, which begins with “Two”. Very well done.

David Metzenthen writes for preschool and primary school children and also young adults. Altogether he has written over 40 books!

‘I wrote this book after seeing a runaway black and white rabbit in a carpark in Melbourne. I quickly organised a posse of kids to surround the rabbit, and eventually we herded it home and back into its yard… ‘Where I live, though, there are many urban foxes… so I took the rabbit incident and brought in a hungry fox and set the story at night where lots of things take place in the dark city while we sleep.’

Mairead Murphy is a Melbourne based artist.  Mairead's style uses the elasticity and softness of detailed pencil work to capture personality and movement in her characters, while digital elements bring colour and texture. Developing and producing images or characters with their own personality is something Mairead always finds surprising and exciting.

Of “One Runaway Rabbit”, Mairead says:

‘The text for the book is minimal so we worked hard to flesh out the details of the story and characters through the illustrations. Lulu the main character is based on a real Rex rabbit and the challenge was to capture the strong features of this breed but still have enough elasticity in her form and expression to portray the story. ‘My son also likes to spot things in books, so I have tried to include many little details to look for in the illustrations. ‘I hope to have captured the general aesthetic of Melbourne’s middle ring of suburbs, the mixture of mid-century and modern buildings and the goings on in the houses.’

You can find out more about Mairead Murphy at her website mairead.com.au

One Runaway Rabbit is a fun adventure. 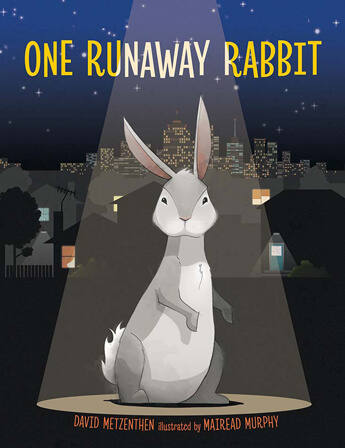